Our Day 3 assignment of the Photo 101 course was “Water & Orientation”, which focuses on our relationships to and stories about water. Also, we experiment with the orientation to see whether horizontal or vertical work better.

I live on Lake Travis northwest of Austin, Texas. It’s actually just one of seven lakes established along the Colorado River. It’s one of two reservoir lakes which are primarily intended for water storage and recreation. The others are “constant-level” where they control the water height so levels don’t rise or fall by selectively releasing water from their dams as appropriate, which makes it attractive for houses and other lakeside amenities. There’s Lake Buchanan, Inks Lake, Lake LBJ, Lake Marble Falls, Lake Travis, Lake Austin, and Lady Bird Lake.

Finally, it is almost full again (97%) after many years of extreme drought where it got very low. After the tremendous extended rains during May 2015, as well as the recent El Nino rains over the past several months, amazingly it has actually filled back up. We have a wonderful view of the lake with many large windows on the back side of our house as well as a full-width deck. But for many years, we can hardly see the water any more, and it didn’t help that the trees have grown higher too. However, now we can really see the water once more, and it makes such a difference. It’s especially beautiful at sunset many evenings when the sun goes down, with various pretty effects depending on cloud configuration, etc.

Unfortunately, we’re having several days of rain again. But I decided to take my water photos of the lake and rain anyway, since so often I tend to take them when it’s sunny. So I thought this might be interesting. Most of my photos captured the lake horizontally since that way you see more of it, but I did try different views (left, middle, right). Also tried to get several pictures during the rain around the deck, where it’s obvious that it’s wet. I cropped several of them to make them more interesting and to eliminate unnecessary stuff. You probably can’t see the rain drops, although it was a nice steady slow rain all day. 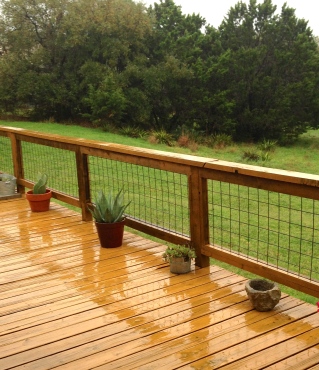 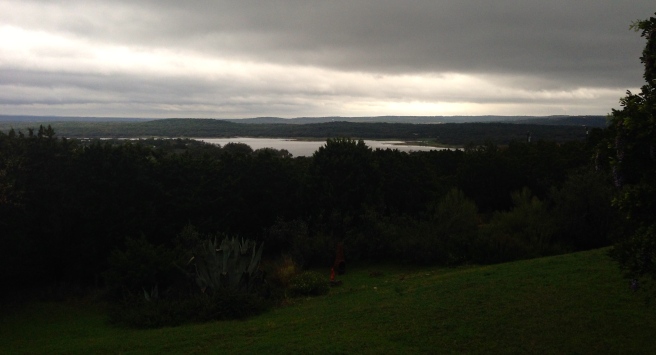 It’s great living here and so nice to have a view of the water. I’m not sure what it is, but it tends to make you feel more peaceful, calm, and relaxed. We haven’t really taken advantage of being at the lake that much other than swimming, since we don’t have a boat. However, we keep intending on going kayaking, although it was so low for so long, we thought there might be more risks until it filled up to normal levels again (which is has).  So now I can we just need to do it.

I visited local swimming pools and the beaches in South Jersey when I was growing up, and always enjoyed the water. My wife also loves the water since she grew up at the Central Jersey shore and went to the beach almost every day in the summer. We had a swimming pool in our back yard when we lived in the Dallas area for about 27 years, and that was wonderful. She and our boys (and often our neighbors) would enjoy it. We decided not to put a pool in our current house, especially since we’re at the lake.

The photos in this gallery were taken with my iPhone 5 using the standard Camera app. More photos tomorrow…